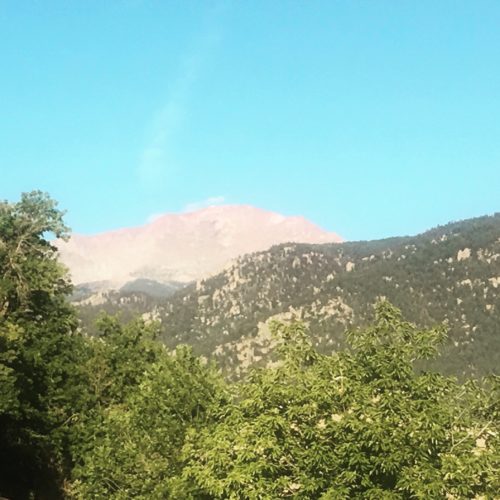 There in the distance was the mountain.

It was August 2016. I had stepped out of my little hotel room in Manitou Springs, Colorado to savor the early morning, and there it was.

Pike’s Peak. In only a couple of days I would attempt to run up there, and back down, in less than 10 hours. The Pike’s Peak Marathon. My dream, my nightmare, my struggle for the past six years. The last time I had tried this, in 2010, I had failed. It had taken many years and a lot of personal challenges to find myself back here.

Some nights, I would literally dream of the mountain in frustration. The mountain took many forms in my dream, but it was always an impossible goal, and at some point during my dreaming I would realize the achievement was beyond me. I would awake out of breath, frustrated, yearning, despairing.

And yet, for years, the real accomplishment eluded me. In fact, I couldn’t even manage to qualify for the marathon, even though I had run it before. I needed a certain time on a previous marathon to qualify. I was too slow, too out of shape. I ate too much; I had no self-control. I had no time to train, no will to go beyond the comfortable.

Pike’s Peak Marathon had become a symbol of everything that was wrong in my life. I had allowed myself to settle, to believe I would never run this race again. I would never summit the mountain among my fellow runners and look out towards the countryside spread out before me. I would never cross the finish line and feel that sense of accomplishment. I had fallen into patterns that assured I would stay right where I was: patterns in my health, in my success, in my relationships.

I know exactly when things began to change. It was a week-long workshop with an amazing business coach, Steve Saporito of Intuition to Succeed. In that one week I went all the way from “can’t” to “can” (that’s a long way!) I came home and less than a week later was running the Little Rock Marathon with a time beyond my wildest dreams — fast enough to qualify me for Pike’s Peak.

Why this story, now? Because this week I’m reading about resistance.

This mountain is what resistance looks like for me.

We all experience resistance, especially when we are going for the really big things in life, which also happen to be the things most worth having. Maybe we want to lose weight, start our own business, run a marathon, write a book. And yet, we don’t. Day after day passes and we haven’t done the things we need to do to accomplish our goals.

The reason is resistance. Resistance really doesn’t look like a mountain. It looks like that next step in the climb, the one we are too tired or too distracted or too heartbroken to take.

That day at the Little Rock Marathon, when I finally broke through and was able to qualify, I realized: there’s really only one way to run a marathon. There has only ever been one way to run any race.

What’s the next step, for you, right now, today? Don’t look beyond that. Just do it. Then do it some more.

See you at the summit.