You Live the Story You Tell Yourself 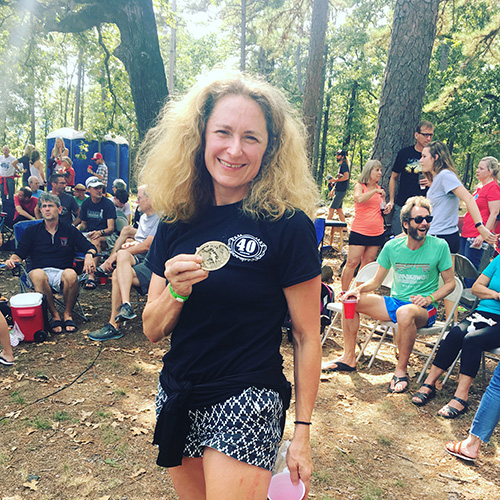 If you have for some reason missed the title of this post I want you to stop. Go back up there and read it again.

It’s been two days and I’m still trying to get my head around it: that not only did I finish the Arkansas Traveler, 100 miles of sometimes very rough terrain (trails, forest service roads, jeep trail, and ohhh, the hills!) but I finished it third of all the women in the race.

This is crazy, but there’s more. I finished it in a year with a record rate of non-finishers, of DNFs (did not finish) as they are called in running lingo. The heat, the humidity, the loose rocks on trail slippery with moss from the rains we had earlier this year, all joined forces to make it a really rough day for some of my friends out there on the trail.

That actually made it hard, too. One of the things about ultra running is you get really close to people; you’re rooting for them. You want to see them run their best race. To see them at an aid station because they didn’t make cutoff, or to hear they fell on trail and did something to their knee and had to drop early … that takes the wind out of your sails a bit.

I finished the race with a time of 24 hours, 31 minutes, only 32 minutes shy of the coveted “sub-24” that gets you a special gold belt buckle. That’s kind of cool, I think, because it gives me something to work towards next year.

But of course the purpose of writing this is not to brag on myself, but to record what I learned. So if you don’t remember the title, go back up and check it out again: You Live the Story You Tell Yourself.

Every race is its own story, and obviously a 100 mile race has a pretty good story. At the beginning of my race I got the chance to hear a lot about someone’s life. At the time I didn’t appreciate it maybe as much as I should have because I was trying to concentrate on not falling on the trail, and because it sounded very complaining to me and that’s not something I’m really down with.

But it was a blessing, really. Because somewhere around 9:30 a.m., as we were coming down the hill into the fourth aid station, I was inspired to say, “You know [name]: We live the story we tell ourselves.”

Yesterday I got an awesome massage from Cora Crain, who was my doula when I had my second child, and she knew just where I got that. One of the midwives at the birth center tells every class: “The difference between pain and suffering is the story you tell yourself.”

And how true it is, for races, and for life! I was able to run the rest of the race with that as my basic mantra. One of my favorite ultra runners (for that matter she’s one of my all-time favorite people) Chrissy Ferguson, told us runners Friday that she has found herself in a dark place on every 100 miler except for one. At least this race, there was no dark place for me. You live the story you tell yourself.

So of course, then, the question becomes how to tell yourself the right story.

I have some little tricks for the trail, and some for life, that I’ve learned. Since I’m only a new baby as an ultra runner, I’m sure I’ll learn more but here’s the scoop for now.

The trick, I’ve found, is triggers that can make you stop when you’re about to slide into that dark place, and turn you in a different direction. Here are mine:

So there you go. The trick of using these little signals, like little bookmarks to get you to the right place in the story, is of course one I learned from photography, from creating artwork that is a bookmark for my clients to return to their best selves. I also take care to try and teach my clients how to get the most out of their artwork by connecting it to their most important stories. Because life, like a 100 mile race, can seem to be a long hard slog sometimes. It’s essential to know the tricks that will keep you telling yourself the story you want to live.